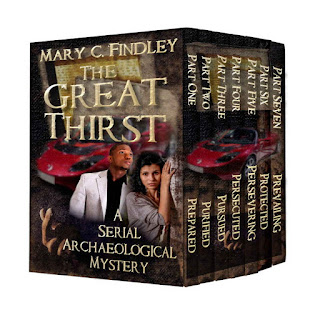 Nothing. 5 witnesses can confirm. You searched our stuff. I paid. We left. Let them GO.

A longer pause ensued than the last one. Another video popped up – Remmy and Sophia being pushed out of a desert-camoed hummer onto a dirt road surrounded by a windy, desert landscape. The vehicle drove away and both of them collapsed.

You can’t just leave them! Talia pounded the keyboard. Where are they? How can I send help?

You only said let them go. Be careful what you wish for.

Talia typed threats, demands, pleas. No response. Finally something clicked in her brain. She subjected the video to a rigorous examination, hammered out searches, and finally came up with co-ordinates. She took out a satellite headset.

“Cherub-rider, I need a big favor,” she said into the mic when she had finally made the connection.

“Copy that, Evangel. Anywhere you say; anything you want.”

Talia repeated the co-ordinates. After a pause, the male voice that had answered swore. “Syria?”

“You know what you owe me,” Talia said. “Pick up two packages, critical. Whatever’s needed. You know I’m good for it.”

“Means going in and out hot. May need to pay some fines for me.”

“Send me a bill. Hot is exactly what I need. Sending you video feed.”

“Holy crap,” the voice said a few moments after Talia had sent the feed of Remmy and Sophia in the desert. “Should I be blowing something up afterwards? No charge for that. God knows where I’d be if it wasn’t for those two–”

“Not yet, but maybe later.” Talia finally allowed herself to smile. “Thank you, Cherub-rider.”

“No, thank you, Evangel. The honor is to serve. Cherub-rider going in double hot.”

By Suzanne D. Williams April 18, 2016
Then came Peter to him, and said, Lord, how oft shall my brother sin against me, and I forgive him? till seven times? Jesus saith unto him, I say not unto thee, Until seven times: but, Until seventy times seven . (Mt 18:21-22) Have you seriously tried that? Which time did that insult spat from careless lips sit right with you? Number forty? Number two-hundred and twenty nine? Speaking from my own experience, it gets harder and more painful each time, not easier, until hearing the same person make the same negative remark becomes too much, and I start to wonder at what point is God going to step in and make them stop? Am I supposed to sit there and take this again and again, my heart being ripped further and further to shreds each time? Pounding and pounding, each blow making that place inside a little more tender than it was. And me more afraid it won't stop. That it'll happen again. Unpredictable. Me always on my toes, head turned, eye squinched, waiting for those
Post a Comment
Read more