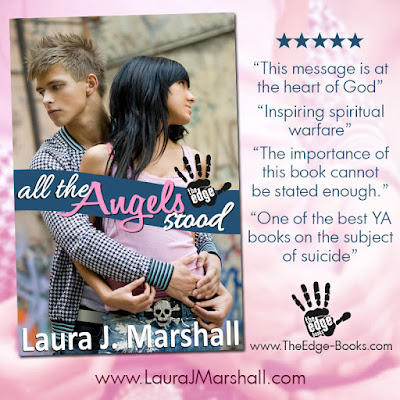 Rush saw that look in Staci when he picked her up, still hopeless. She looked gorgeous, as only she could look. Her long black hair accentuated her fair skin and dark eyes. He could tell she was nervous and…weary. It was the vibe he had gotten, like she was beyond caring. He had tried to joke with her in the car on the way over, but he swore it fell flat. This wasn’t just about the evil surrounding her anymore; this was about Staci...the person. He was falling for her. On one hand, he wanted to protect his heart. On the other, he wanted to wade full on in and make her care as much as he did…about herself…and about him.

“Adam’s in the band,” Rush said, leading the way into the sanctuary.

“Band?” She asked with her eyes wide. She really seemed to have no idea what all this was about.

“Yeah, we do praise and worship before the lesson, just a few songs.”

He could feel Staci trying to adjust to this information as they moved down the aisle flanked on both sides by fabric-covered chairs. He took her hand and picked out two seats to the right of the stage. Jenny and Angelica had disappeared and Adam had left a few minutes earlier to warm up on the drums. Everyone filed in and low murmuring could be heard. The instruments tuned on the stage.

A screen descended behind them and the words of the song came up. Mike was in the front at the mic and he led them in a prayer.

“Dear Lord, we come to you now as a community of believers to lift up Your name…”

Sometimes he just knew if something wasn’t right with a person. It could be a feeling or a physical manifestation. Rush had this. He didn’t always see the demons. Sometimes he just felt them there over a person or place. Some clung, some hovered, some possessed. Rush didn’t feel adequate or up to the challenge. He continually fed his faith the Word of God. He tried to remind himself the battle was the Lord’s and all he could do was pray and intercede.

In the face of fear and doubt, he looked to Jesus. He couldn’t save anyone or make someone care. How do you help someone move from take my life to Lord, preserve my life?

And how did his heart get tangled up. “The Fixer” couldn’t fix this. Only God could and right now, Rush needed Him to save them both. Staci from the clutches of the enemy and Rush from the fear of caring.

Staci had shown him how to be vulnerable and truly care. Want to care. He thought he was immune. And now he was falling for her. She was so encumbered, yet still fighting or wanting to fight. He had to help her but what more could he do? His judgment was askew and as the music began to flow over the crowd, he prayed even harder for wisdom.

By Suzanne D. Williams December 13, 2016
http://amzn.to/2gJ2Add https://elkjerkyforthesoul.wordpress.com/ “Come on. Come on. Come on!” Talia chanted, until the messaging application appeared. The characters she typed were not English. Arrived stateside. Keep your word. The response came after a long lag. How many lies told to pull that off? Talia ignored the taunt and repeated her message. Location of artifacts? Proof of life first. You withheld dive info. Proof of life. A video link appeared after some delay, time-stamped to within moments of the current time in western Syria. Talia forced herself not to react to the sight of her aunt and uncle in a small room half-filled with sand, lit only by slits near the roof, and no apparent water or food. Remmy paced like an angry bear, but very slowly and clumsily, slipping on the sand. Sophia sat huddled in a corner. The video clipped off abruptly. Talia typed in co-ordinates of the dive site off Ugarit. What recovered? the question blinked into view. Nothing. 5 witness
Post a Comment
Read more

By Suzanne D. Williams April 08, 2018
Then came Peter to him, and said, Lord, how oft shall my brother sin against me, and I forgive him? till seven times? (22) Jesus saith unto him, I say not unto thee, Until seven times: but, Until seventy times seven . (Mt 18:21-22) I had a bad day. You know, one of those where even the dog doesn’t cooperate? Well, ‘round about 10 a.m., I exploded. I screamed at everyone within a two-mile vicinity. And regretted it afterward. You know the drill. “I should never have … and now they will always think of me like …” Regret is a good thing, though, because it got me thinking about forgiveness and repentance. “Lord,” I said, in a sort of prayer, “Seventy times seven is REALLY hard to do.” It looks good on paper. As Christians, we should be all “turn the other cheek,” “love the unlovely,” etcetera. Except I’ve seen anger and offense creep into the church. Someone lit into me the other day over something trivial, and I was taken aback. But struck harder by the thought I was
Post a Comment
Read more